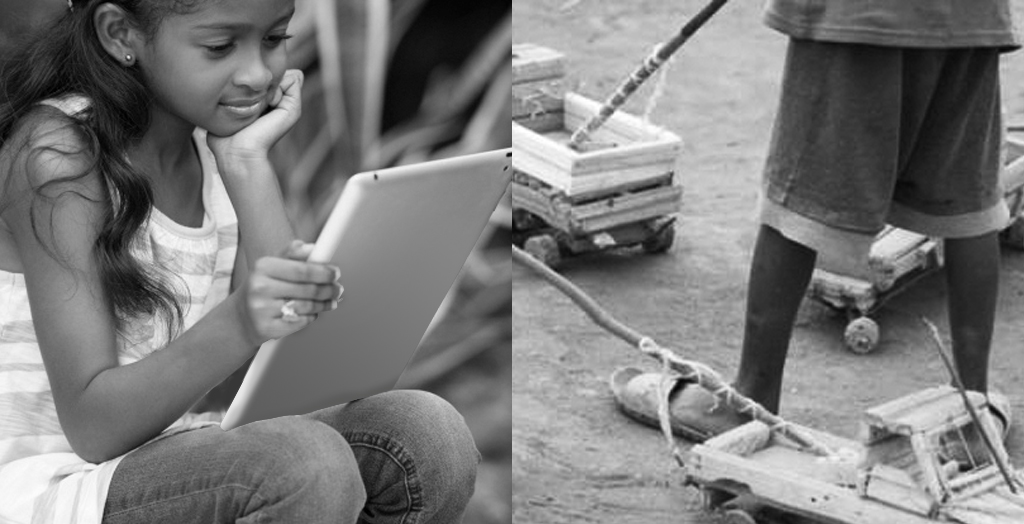 A FEW DAYS AGO I WENT OUT FOR LUNCH at a family style restaurant near my home. While I was waiting for an available table, a family of four—two parents and their two six to seven years old children walked in. Both children each had the latest-generation iPad Air with them, and were deep into playing a gaming app, while the father was also on his iPhone texting. As soon as the mother requested a table, she stood a few steps away, took her iPhone out and started to be completely immersed in it. In the 15 plus minutes of wait time, all of them did not look up nor did they talk to each other.

I was placed between the table of this family and a table of another family—two parents with two ﬁve to six year old children. Similarly, all of them were fully engaged on their personal touch devices, disengaged from everyone else around the table. I have observed the earlier family has not put their devices away for one moment throughout their lunch time.

Of course I do not know completely what their other family time is like for this instance could just be a family “break time” by having device-based entertainment. It is also understandable that most parents like to provide the best for their children. However, this scene is upsetting because I consider their behavior as a manifestation of First-world societies’ consumerism and material excesses.

The black dot on the map indicates the location of the villages I visited.

This lunch scene brought back the memory of The Golden Triangle (TGT) trip and aftermath upon my return.

TGT’s impoverished condition shares many parallels with Zambian Copperbelt region’s rural area. In my visit to the mountain villages 20 years ago I witnessed hordes of haggard children (from infants to pre-teens) running around barefeet on dirt and animal excrement, in tattered clothing, often without pants. If their parents are not addicted to opium/heroin they would leave the children behind to either work far-off in towns or among the Opium Poppy ﬁelds. In the villages there were more young boys than young girls. When a child reaches teenage-hood the males would join their parents in towns or in the ﬁelds, the girls would be sold off in marriage or trafﬁcked into sex industries.

The children had nothing and do not expect anything better than their current situation. Yet children will be children they remain innocent and playful, the lack of material processions did not stop them from being—it even encouraged them to be—creative/industrious by inventing games, and making simple toys like spinning tops and dolls out of raw materials found around the huts and woodlands. When I asked the older children (13 years old) how they feel, they always tell me although they feel lonely without their parents around they are not angry at God nor blame their parents.

During that time I was a Sunday school teacher with a handful of children who were in the same age group as the village children. With my exposure of village life and my service there, my sensitivity has became heightened. Seeing the huge social-economical contrast between the home-life and TGT, added by my former Sunday school students constant complains to their parents of “I want the Nintendo 64!” “NO the Saga Game Gear is BETTER! Mine broke, my dad will get me a new one!” “MOM!!! I WANT Treasure Trolls! 😡 ” made me angry at the overindulgence and entitlement in society for a long period of time after the return.

Seeing the echoes of the TGT experience, I want to prepare my heart and soul to serve the vulnerable children in Zambia and for the likelihood of facing a similar reverse culture-shock after this trip. Hoping in the span of 20 years I am now more mature and wiser than before; instead of becoming a cynic I am praying that I will become a blessing. Knowing about my sensitive side and the anticipation, I think having in-depth discussions with the fellow team members and other teams on this subject, have proper daily debriefs during and after, and keep a loving humble heart where ever I am is the best approach.

Addiction comes in a wild range of forms—opium, technology, or cynicism. How parents rear their children is really none of my business. The only thing we can do is to surrender our whole being to The Lord and live a life of grace. Also to learn/practice demonstration of love by telling others of God’s stories and of those who has no material procession yet rich in spirit because of God’s Grace.

Since my visit to TGT’s mountain villages, I often recall the beautiful smiles on the local children’s faces. I would like everyone to also have the same pure smiles on their faces.

Right header photo by Kate Sutton-Johnson | Boy from Nyanga stands amongst toy trucks made by he and his young friends. tcgcircle.org